Adapted from the LibGuide for LAW 627, the 1L course in legal research, this guide is intended for students enrolled in LIS 530 GLE, Legal Resources. It has been edited for course length as well as scope/audience.

Before class, you should:

Legal Information Institute (LII) - free source for the U.S. Code and CFR, the Wex legal encyclopedia, and other free access to U.S. law.

American Memory: A Century of Lawmaking for a New Nation - Digital documents from 1774-1875 from the Library of Congress.

Bill - A legislative proposal for a law

Code / Statutory Code - A law (statute) published as a subject arrangement. When a new law is passed, all its components have a place in the existing Code, in their appropriate places.

Enactment - Used in conjunction with the date, and refers to the date of signature by the President

Public Law - A law (statute) published in the Statutes at Large

Session Law - All the laws passed during a given session of Congress, published in order of passage (and numbered as such).

Slip Law - The first published form of a law (statute).

Statute  - A law enacted by a legislative body - such as the U.S. Congress, or a state senate. Statutes are the primary source of law in the United States, and typically authorize an administrative agency (such as the Federal Communications Commission, or the Securities Exchange Commission) to adopt rules pursuant to the Statute. (from Wex)

In any statutory problem, you will want to find out how the statute has been applied to real people and situations, and whether it's changed over time. To see both, you should look at: On LexisNexis, WestlawNext, or in print, pull up the statute that sets out the factors for "fair use" as a defense to copyright infringement, and find out what it says about using clips from broadcast sports events in a television news program.  The citation is 17 U.S.C. § 107. 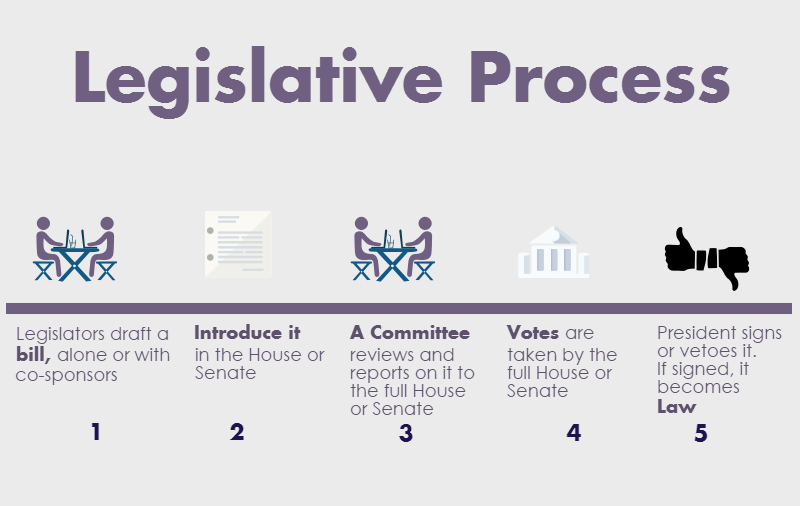 When you want to do research on this legislative process, you can look for the documents produced at each stage along the way:

1-2. Every time a bill is introduced in the House or Senate, it is given a Bill Number and published as a government document. Bills can be found on Congress.gov, Congressional Universe, and in other library collections.

4. When bills are introduced, discussed, debated, and/or brought to a vote, it's done on the House or Senate floor. The journals of the House and Senate are published as the Congressional Record, and it is available widely. including on Congressional Universe and Hein Online.

5. When a bill passes both houses of Congress, it is then presented to the President of the United States for signature, If the President signs it, it becomes law, is given a Public Law number, and is published both on its own as a Slip Law, and in the Statutes at Large. The Statutes at Large also includes additional information, such as the Presidential Signing Statement (if there is one), the number of the bill that was ultimately passed (i.e., which version - House or Senate), and information about the Conference Committee Report (if there is one), which reports on the resolution of language between the House and Senate versions of the bill.

6. Finally, the new law is incorporated into the U.S. Code, which is organized by subject-based groupings called Titles.

This page will provide you with an overview of statutory codes. At the end of this lesson you should be able to: