To make best use of this unit, please read the information in all boxes, referring to the definitions box as necessary.

At the end of this lesson, you should be able to:

Authority The Authority field in a codified regulation lists the statute that gives the agency the power to carry out the charge that this regulation fulfills. It is almost always a citation to the United States Code. In other parts of the regulation, however, the agency will usually cite to the act in its public law format..

Code of Federal Regulations (CFR)
Official publication and source of Federal regulations that are general/permanent. Divided into 50 numbered "Titles," each of which represents a subject of regulation.

Enabling Legislation, or Organic Statute
The Federal (Congressional) statute that gives an agency authority to promulgate regulations. An authority statement accompanies every regulation or group of regulations. Look to the beginning of the Subpart, Part, or Subchapter, if you don't find one listed at the end of the regulation itself.

Notice of Proposed Rulemaking (NPR)
Required by the APA, this notifies the public and other governmental bodies that the agency intends to promulgate a new regulation.

Promulgate
To promote or put into effect, this is the verb applied to the action of creating a new rule or regulation (laws are enacted or passed; rules are promulgated).

Rule/Regulation
These are equivalent terms for a body of law created by the Federal agencies, to comply with Congressional directives (i.e., the enabling legislation).

Source The Source field in a codified regulation lists the citation to the issue of the Federal Register where this regulation first appeared.

Regulations.gov - Source for tracking rules through the regulatory process, including digital files of public comments.

e-CFR - GPO-produced but not official version of the CFR that incorporates changes into the text on an ongoing basis, in HTML.

govinfo.gov - Electronic versions of the Federal Register and the CFR, in HTML and PDF.

To cite regulations, use the Name of the regulation, and the title and Part or section.

In any regulatory problem, a host of additional resources may be available to you in the form of:

Regulations, also known as rules, are made by agencies (FCC, EPA, etc.) in accordance with an enabling statute passed by Congress. Congress passes a law outlining an area broadly, and the agency is charged with implementing the legislation by making specific rules and enforcing any violations.

Final regulations are assembled into a subject-based code, which is used to see what the current regulations are on a given industry or topic. This is the Code of Federal Regulations, and the subject divisions are called Titles (like the U.S. Code).

Every Federal regulation published in the Code of Federal Regulations must contain two citations:  Authority and Source.

Authority is a United States Code citation to the enabling legislation where the agency got the power to promulgate this regulation.

Source is a Federal Register citation to the page where the regulation was first published. 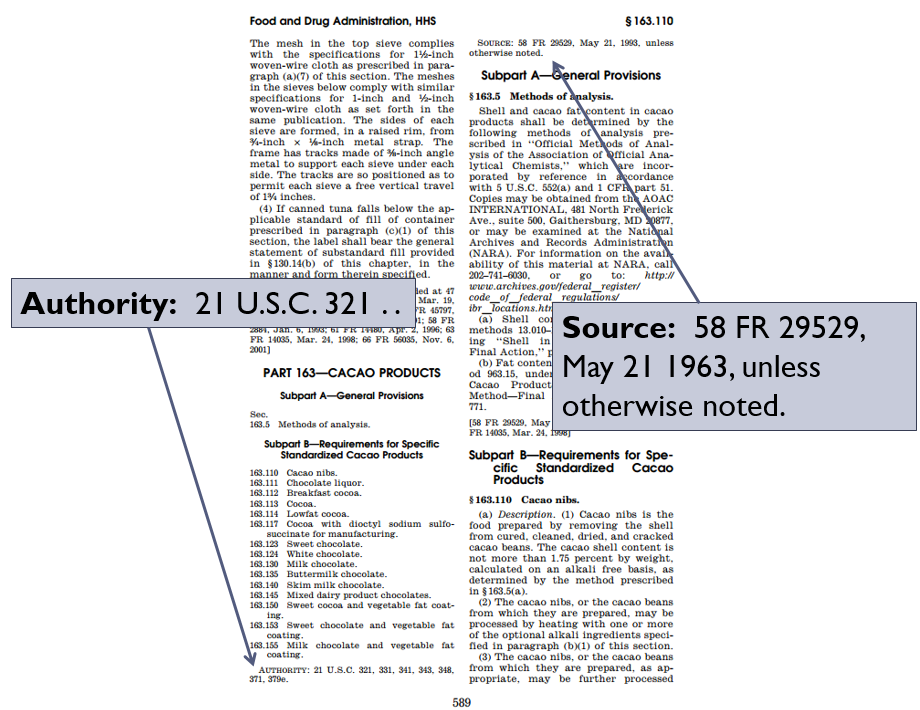 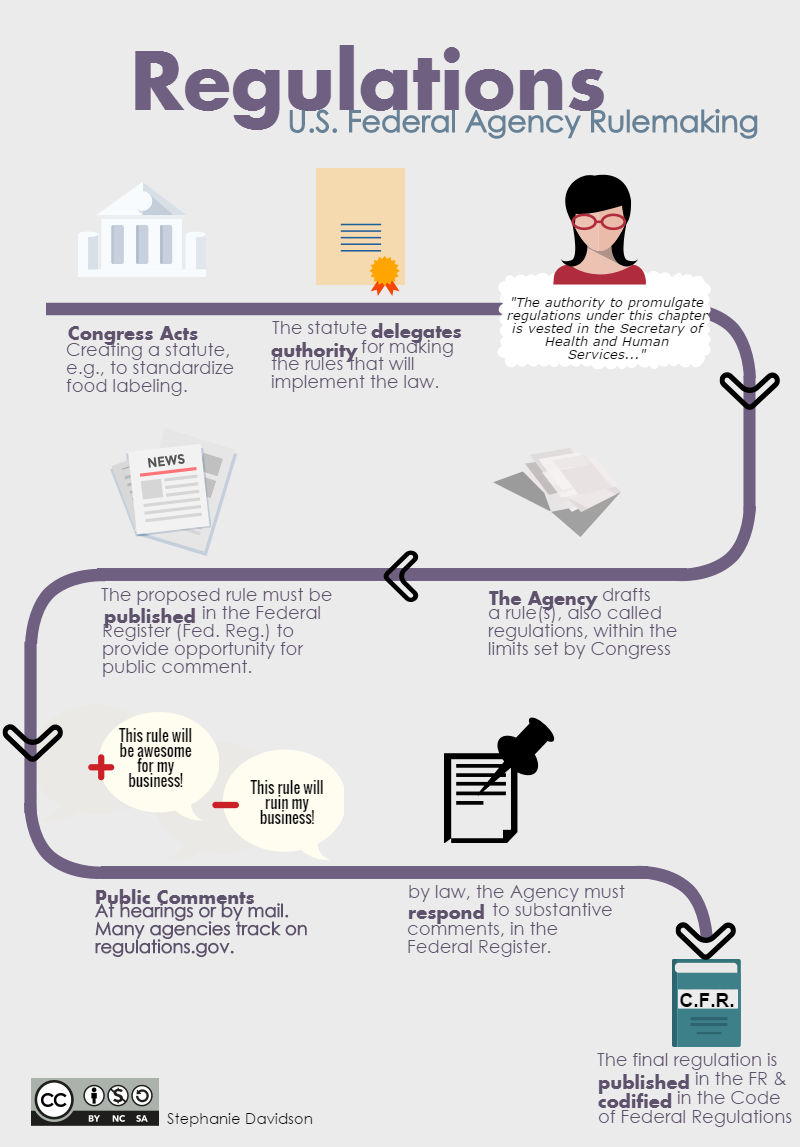 For the purposes of this chapter--

(d) The term “Secretary” means the Secretary of Health and Human Services....

(i) The nutrition information shall be set off in a box by use of hairlines and shall be all black or one color type, printed on a white or other neutral contrasting background whenever practical.

(ii) All information within the nutrition label shall utilize:

(A) Except as provided for in paragraph (c)(2)(ii) of this section, a single easy-to-read type style,

(B) Upper and lower case letters,

(C) At least one point leading (i.e. space between two lines of text), except that at least four points leading shall be utilized for the information required by paragraphs (d)(7) and (d)(8) of this section as shown in paragraph (d)(12), and, 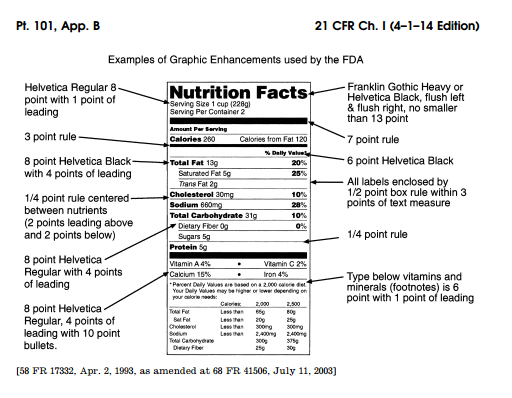