This page will provide you with an overview of how to work with case law from U.S. courts.

At the end of this unit you should be able to:

Citator -- A citator reports when a document is cited in same other subsequent document. With case law, legal citators indicate when a given case has been cited by a later case, and if so, what effect that later citation had on the original case. Any case you plan to rely on as precedent must be carefully updated using a legal citator. The three main citators are: Shepard's on Lexis+, KeyCite on Westlaw Edge, and BCite on Bloomberg Law. See also Unit 8: Intermediation.

Digest -- A digest is a collection of case headnotes arranged by topic. Originally in book form, digests allow you to find cases on a particular point of law in a particular jurisdiction. Online services provide digests on the fly as you search for particular topics. See West Topic and Key Number system, below.

Headnote -- Headnotes are points of law in a case that have been abstracted and listed in sequential order at the beginning of a case. Headnotes are arranged by topic with headnotes from other cases in a digest. See also Unit 8: Intermediation.

Opinion - Majority -- One judge writes the opinion when a majority of judges agree with the holding.

Opinion - Concurring -- A judge who voted with the majority opinion, but writes separately because his or her reasoning is different.

Opinion - Dissenting -- A judge who writes a separate opinion where the reasoning and the holding are different from the majority.

Opinion - Per Curiam -- Literally "By the Court." This happens when the court issues a unanimous opinion, typically on a controversial topic, so that no one author can be singled out.

Official / Unofficial Reporters -- The official reporter is printed by the court, or a publisher selected by the court. It is the authenticated record of court opinions. Some courts recognize the West Publishing's regional reporter as official. Table 1 of The Bluebook provides a complete listing of the reporters for each jurisdiction in the United States, and indicates which one is The Bluebook "preferred" citation.

Parallel Citation -- The same case reported in a different publication.

Published / Unpublished Opinions -- An opinion is considered published unless it is labeled unpublished. The court typically designates an opinion as "unpublished" if it does not add anything new to the respective body of law. Courts have different rules about whether they will accept citations to unpublished opinions.

Reporter -- A reporter is a collection of cases in chronological order. Originally in book form, reporters allow us to read the text of cases from a given court. Although you will read cases almost exclusively online, most reporter publishers continue to designate the citation of cases cases by the volume, reporter series, and starting page number of a case.

Slip Opinion -- The opinion as issued by the court as a stand-alone document on the day it is decided, before it has been assigned a volume and page number in the official reporter.

Star Pagination -- A device, typically and asterisk *, which shows the page breaks for a case in different reporters. Internal page numbers are important for pinpoint citation of quotations.

Syllabus or Synopsis -- A summary of the case. It will usually describe the procedural posture (how the case got to the court) and the holding. It is not part of the official opinion.

Why it's important to understand the difference between the official text and an editorial enhancement:

In the first place, the headnote is not the work of the court, nor does it state its decision. . . . It is simply the work of the reporter, gives his understanding of the decision, and is prepared for the convenience of the profession in the examination of the reports. . . . And finally, the headnote is a misinterpretation of the scope of the decision.

Finding, reading, and updating cases is one of the most basic and fundamental skills for a lawyer. This process is more complicated than it might seem at first. Case law is not organized by topic or point of law, so finding the right cases requires skill in searching and using case law tools. In addition, a point of law in a case can be affected by decisions in other cases. Reading the original case will not give any indication of this effect. For this reason, lawyers must be able to update cases in order to understand their current value as precedent and how they relate to other cases in the same area of law.

Units 8 (Intermediation) and 9 (Searching) will cover how to find cases on a specific topic or point of law. This unit will cover finding, reading, and updating cases when you already have the citation.

During the course of law school you will read hundreds of cases. For the most part, these cases are appellate opinions. It will become faster and easier as you get more practice. In this course the most important thing is to learn the difference between the editorial enhancements, which are designed to help you find other cases, and the official legal opinion that contains the law.

The opinions you read will make more sense if you understand where they come from and how they are published. You need to be able to separate out the official part of the opinion from the editorial enhancements. The words of the judge writing the majority opinion are a primary source of law, the rest of the information is interesting, but cannot be used as precedent. A dissenting opinion is not the law, but it can be cited as persuasive authority. Sometimes, when overturning a lower court, the higher court will adopt the reasoning from the lower court's dissent.

ANATOMY OF A CASE:

122 Mich.App. 418 [Official Citation]
Court of Appeals of Michigan. [Court]
William L. FISHER, Plaintiff-Appellant, [Party Name]
v.
Karen LOWE, Larry Moffet and State Farm Mutual Automobile Insurance Company, Defendants-Appellees. [Party Name]
Docket No. 60732. [Docket Number]
A wayward Chevy struck a tree [Syllabus or Synopsis]
Whose owner sued defendants three.
He sued car's owner, driver too,
And insurer for what was due
For his oak tree that now may bear
A lasting need for tender care.
The Oakland County Circuit Court,
John N. O'Brien, J., set forth
The judgment that defendants sought
And quickly an appeal was brought.
Court of Appeals, J.H. Gillis, J.,
Gave thought and then had this to say:
1) There is no liability
Since No-Fault grants immunity;
2) No jurisdiction can be found
Where process service is unsound;
And thus the judgment, as it's termed,
Is due to be, and is,
Affirmed.
[West Headnotes + West Topics and Key Numbers] 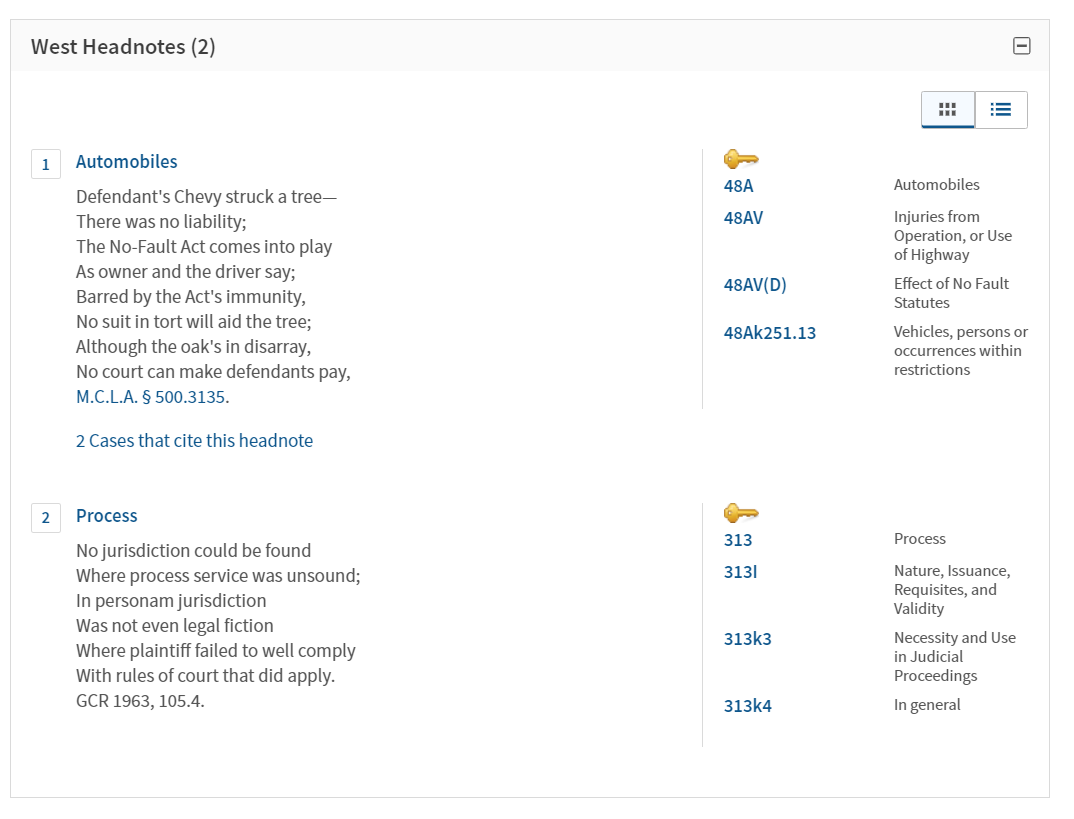 J.H. GILLIS, Judge. [The OFFICIAL opinion begins here]
*419 [Star Pagination - page in the book where these words appear]
[1][2] [Numbers in square brackets [ ] are added by the editor and point to the language of the case used to create the headnotes]
We thought that we would never see
A suit to compensate a tree.
A suit whose claim in tort is prest
Upon a mangled tree's behest;
A tree whose battered trunk was prest
Against a Chevy's crumpled crest;
A tree that faces each new day
With bark and limb in disarray;
A tree that may forever bear
A lasting need for tender care.
Flora lovers though we three,
We must uphold the court's decree.
Affirmed.1 [Holding]

[Important points of law are often found in footnotes]
1
Plaintiff commenced this action in tort against defendants Lowe and Moffet for damage to his “beautiful oak tree” caused when defendant Lowe struck it while operating defendant Moffet's automobile. The trial court granted summary judgment in favor of defendants pursuant to GCR 1963, 117.2(1). (Court Rule) In addition, the trial court denied plaintiff's request to enter a default judgment against the insurer of the automobile, defendant State Farm Mutual Automobile Insurance Company. Plaintiff appeals as of right.
The trial court did not err in granting summary judgment in favor of defendants Lowe and Moffet. Defendants were immune from tort liability for damage to the tree pursuant to § 3135 of the no-fault insurance act. M.C.L. § 500.3135; M.S.A. § 24.13135. (Parallel citations to Michigan Statutory Codes)
The trial court did not err in refusing to enter a default judgment against State Farm. Since it is undisputed that plaintiff did not serve process upon State Farm in accordance with the court rules, the court did not obtain personal jurisdiction over the insurer. GCR 1963, 105.4.

It is critical to update each case you rely on to see if it has been overruled by a later case, or occasionally a statute. This is done by referring to a citator. Citators have two functions: one is to see if the case you are starting with is still good law, and the other is to find more cases on the same topic. See Unit 8: Intermediation for additional information on how to use a citator as a finding tool.

Each of the online legal research systems has its own brand of citator, and each of them use a different set of symbols to indicate later treatment of your case citation. The colors vary, but red always means negative treatment. Does this mean you shouldn't use a case that has a red signal. Certainly not. Think of it like driving. When you see a stop sign do you stop, turn around and never go that way again?

No, you stop, take a good look around and proceed with caution. That's exactly what you do here. The signal doesn't mean anything by itself, it has to be taken in context. You have to read the case that cited your case and look to see exactly what the court did. If the issue that has negative treatment has nothing to do with the reason why you are citing your original case, so go ahead and use it.

How Cases are Published 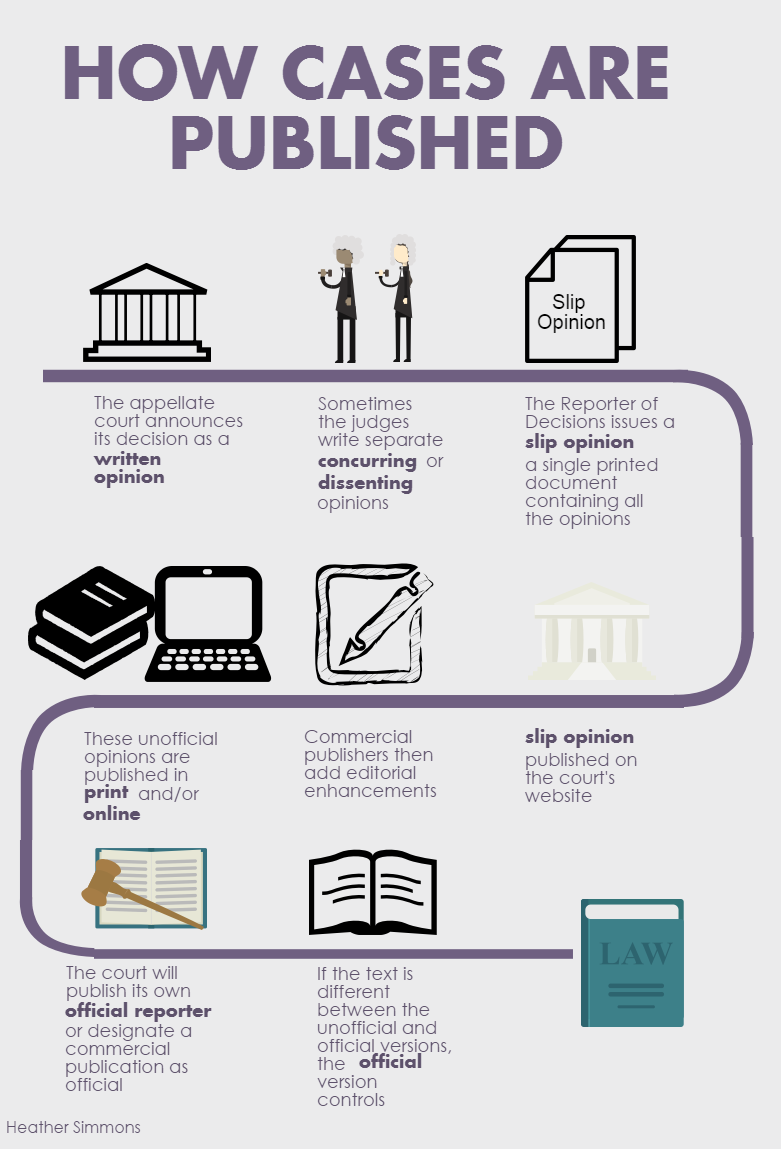